It’s often said that all good things must come to an end. The ‘good thing’ in this case? Average Position in Google Ads.

We’ve known the end was coming since Google announced its plans to sunset the metric back in February, and now we’ve been given just six weeks to say our goodbyes. The Average Position metric will start disappearing from accounts on 30th September.

Average Position is a metric that most digital marketers are more than familiar with. It’s been around since the early days of Google AdWords and, historically, has been useful in determining where your ad appeared in the search results page.

However, the search landscape, SERPs in particular, aren’t what they used to be! The removal of the right rail, growth of mobile and a host of new features - shopping ads, the knowledge graph, featured snippets - means position one doesn’t always relate to the top of the page.

While this was understood by most in the industry, the term ‘position’ was misleading. And that’s why it’s got to go.

What Else Can I Use?

When one door closes, a window opens. Apparently.

In this case, it appears that Google has opened four windows; “Impression (absolute top) %”, “Impression (top) %”, “Search absolute top impression share” and “Search (top) IS”. These ad position metrics were introduced into the platform last year. 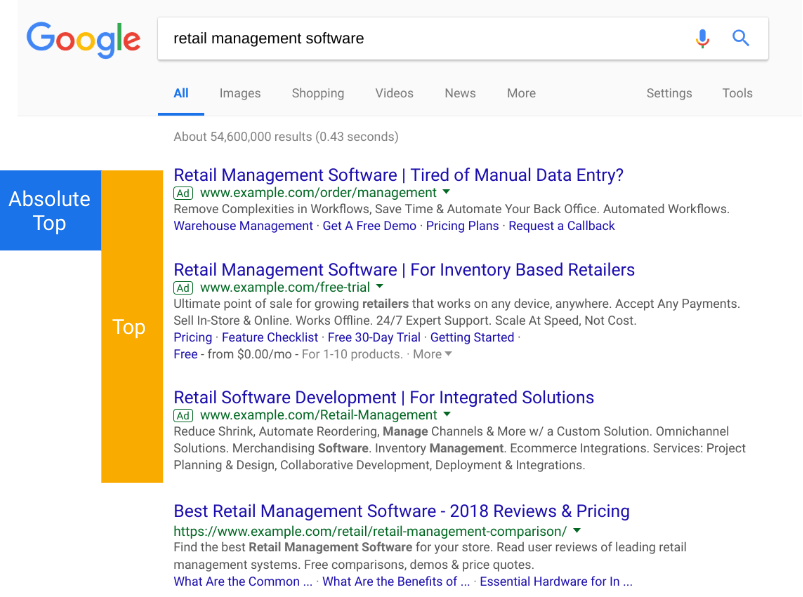 Though different from our good friend, Average Position, these shiny new metrics paint a crystal clear picture of where ads are appearing, arguably clearer than Average Position ever did.

Here at SearchStar we’ve been using these new metrics for campaign optimisation and reporting since their release. They’re particularly helpful for advertisers focused on brand awareness, as they tell you exactly when your ads have appeared at the top of the page.

If you’re relying on Average Position for optimisations or reporting, you’ve got a few weeks to take stock and change tactics. Check your scripts and rules that rely on the metric - these will likely throw up errors after 30th September.

Other areas to check are custom columns based on Average Position and saved filters, both in the normal interface and within saved reports. These will start behaving differently once the metric disappears.

When it comes to reporting, it’s likely that the Average Position column in tables will just disappear, both in Google Ads and Data Studio. Any scorecards will return an error message.

Lastly, if you’re using the value track parameter {adposition} for other reporting, you’ll start seeing an empty string in your data.

If the heartbreak of losing Average Position in Google on the 30th September seems unbearable, you can always rely on Bing to lift your spirits!

And just to keep us on our toes, they’re now grouped under the heading of ‘prominence metrics’ rather than ‘share of voice’.

While Average Position in Google is no more, the new Top and Absolute Top metrics should provide you with more than enough information to understand where your ads are appearing in search results.

Evaluate where you’re currently relying on Average Position, and consider how the new metrics can step in from the 30th September. If ad position metrics are getting you in a muddle, the SearchStar team are on hand to help. Get in touch with the team.

What Are Performance Max Campaigns?

Google Enhanced Conversions: What You Need to Know