Google’s share of ad spend has plateaued, while Amazon is surging forward seemingly unstoppably. And yet the battle rages on. Off the back of Google’s Q1 results, we consider who will win out in the clash of the two biggest players in search and ecommerce.

The rise and rise of spend on digital advertising in general, and on Google in particular, has been one of the mainstays of marketing headlines over the last 10 years.

Barely a year has gone past when there hasn’t been news of Google’s unstoppable growth and, in a way, 2018 doesn’t promise to be any different. Figures published by eMarketer project a 15% growth in Google’s US ad revenues for 2018, taking them to just shy of $40B.

Despite this continued revenue growth, Google’s dominance of digital advertising appears to be on the wane. For the second year running, the search engine’s share of US digital ad spending is projected to fall, down from over 40% in 2016 to 37.2% this year.

In past years, responsibility for this loss of market share has been attributed to growing Facebook ad revenues. But now, these too are suffering from something of a slowdown, with Facebook’s share of digital ad revenues expected to fall for the first time ever (down from 19.9% to 19.6%).

By contrast, Amazon is expected to see close to 65% year on year growth in ad revenue. Amazon’s ad revenues might be small compared to Google’s (a mere $2.89B) but their growth trajectory is quite different, with the ecommerce giant expected to almost double their share of revenue to become the third biggest player in the digital ads market by 2020.

Looking at usage data (taken from Hitwise) for Amazon and Google in the UK it’s perhaps surprising that the predictions for Amazon’s ad growth aren’t even more bullish.

The exact accuracy of these figures is, of course, debatable but it gives a general understanding of the relative scale of Google to Amazon. These figures alone show that Amazon isn’t so far behind Google in terms of traffic, but the gap closes even further when you dig further into the data.

While Google may enjoy 63% more visits than Amazon, the differing nature of the two sites means that Amazon has a much higher pages/visit rate, and if we look just at page views, the gap between the two closes to around 40%.

Then consider the traditional categorisation of search types on Google: informational (“Know”), navigational (“Go”) and transactional (“Do"). It’s estimated that up to 80% of Google searches are informational and so present limited scope for advertisers.

Even if we assume informational queries only account for 60% of search, “commercially interesting” visits on www.google.co.uk make up just 12B of the 30B total. Meanwhile, it’s fair to assume that all 11B visits to Amazon have a degree of commercial intent.

Accordingly given the difference in pages/visit, Amazon starts to surge ahead of Google in terms of its ability to serve relevant ads to in-market users. 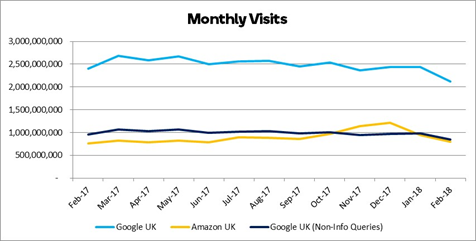 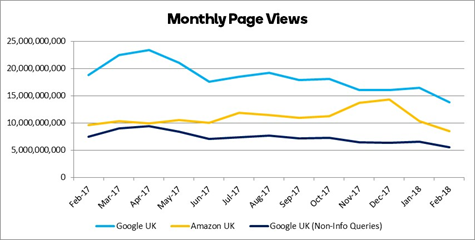 Even (perhaps, especially) on transactional search queries with a high degree of commercial intent, Amazon can compete with Google for advertising revenues.

Take a search query for [Fitbit]. The Google Keyword Planner indicates that approximately 1,390,000 monthly ad impressions are available on Google for this search query. Meanwhile, Hitwise data suggest that Amazon receives around 65,000 visits from people using this search term.

Multiplying this figure by 12 (average pages/visit) gives 780,000 page views (potential ad impressions) on Amazon – 56% of what Google offers, even before you factor in relevant traffic from other sources.

It would be easy to dismiss the advertising potential of Amazon by suggesting that by the time users have got themselves to the site they already know what they’re going to buy. If this is the case, what’s the point of further advertising spend?

However, not much more than a third of traffic to Amazon.co.uk is delivered by search, and Youtube is shown as Amazon’s second largest referrer of traffic. This indicates that there’s a huge amount of general browsing behaviour going on, which is not necessarily related to “bottom of the funnel” activity, and that there’s plenty of scope to view Amazon advertising as a means of driving awareness and consideration, as well as stone-cold sales.

It has been seen that Amazon already has the quantity and quality of traffic to compete with Google for a much larger share of advertising budgets. So, what’s stopping it from growing ad revenues even faster?

There’s certainly a question mark over the current level of sophistication within the Amazon advertising platforms, and Google obviously has an enormous head-start in this respect.

That said, given the scale of the sums of money up for grabs, it seems fair to expect Amazon to be putting huge amounts of resource into closing this gap. (Of course, if you need expert help to navigate the various options available through Amazon, you know where to come.)

Advertisers might be reluctant to engage with a platform that has a pure ecommerce heritage. The ever-growing list of products and services on offer from Amazon will certainly broaden the scope of advertisers who see Amazon as a good fit for them, but so will the increasing degree to which the site is seen as a destination in itself.

The growth of Amazon Prime Video and Music, not to mention Echo and Alexa, coupled with the incredible richness of audience data that Amazon hold, should mean that it will soon become a viable channel for the vast majority of advertisers.

Interestingly, there’s also a fightback from Google on the shopping-front as they seek to keep the advertising and retail dollars flowing their way.

Through its Google Express program, Google is partnering with major retailers in the US in something of an “anyone but Amazon” strategy, providing the partners with added advertising clout and next-day delivery capability.

The hope is that, by levelling the playing field in this way, Amazon doesn’t become everybody’s default shopping destination and Google doesn’t lose further influence as a result.

And the winner is…

In 2017, Amazon took global net revenues of $177.9B, versus Google’s $109.6B, so there’s no doubt that they have the funds available to bank-roll their way into the market with better platforms, better tech and better advertiser support.

They have also taken a lead over Google in getting digital voice assistants into people’s homes, with over 70% of market share in the US. With voice search touted as the next-big-thing, this is a very significant figure.

It’s (worryingly) hard to imagine a world in which Google isn’t the dominant online advertising presence, but with Amazon making all the running, perhaps that world isn’t so far away.